The recipient site must always be dissected first. The previous incision of the adenectomy will be used.

Careful dissection of the fibrosis must be performed. It can be very difficult, depending on the radiotherapy.

The thoracordorsal vessels must be dissected and a branch must be chosen for the anastomosis.

In the place of the adenectomy, strong fibrosis can compress the axillar vein, the plexus and even the artery. The space around the plexus must be freed. The flap will be inserted in the dissected place to avoid fibrosis recurrence. This dissection can be very dangerous for the vessels and the nerves, nothing being at the normal place , and tissues, wall of the vessels, nerves may be burned by the radiotherapy. 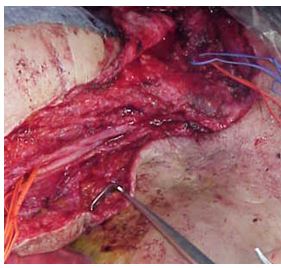 Complete dissection of the nerves and axillar vein , and thoracodorsal vessels

The oblique incision has to be performed between the iliac crest and to the pubic region, like a hernia.

It must be designed above the iliac crest in any case. Always be sure that with the retractors, you do not go too low !. . Self retaining retractors must be avoided to always be able to watch the margins of the flap. The differences of the orientation of the fibers of the muscles can help to prevent to go on the upper part of the leg.

The circumflex iliac vessels are individualized. The flap size is designed depending on the needs , but the limit of the flaps are, externally the iliac bone, internally the CIC vessels and inferiorly the inguinal crease. During the elevation of the flap on his pedicle, never pull on the flap to avoid raising of the deep inguinal nodes, and never on the thigh region.

At the recipient site, if the plexus is very compressed, or if skin is needed (axillar or breast), the flap will be enlarged on his upper part.

Design of the flap always above the inguinal crease

The circumflex iliac vessels must be dissected with the pedicle as long as possible and the deep or superficial epigastric vessels must be chosen, before beginning the surgical dissection to be able to insert in the axillar region, after whole debridement of the scar tissue and individualization of branches of the thoracodorsal vessels. 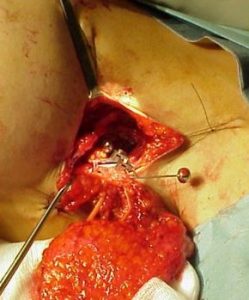 If the anastomosis is done in the mammary vessels, the ALNT must be dissected in the opposite site of the epigastric vessels.

If the anastomosis is done in the axillar region, the dissection will include the nodes in the same portion of the epigastric vessels .

Drains are placed in the defect witch is gently closed in 2 layers, fat with fat.

The reconstitution of the internal inguinal region is important.

After the second day (for the ALNT), the drains are removed and compressive spank is recommended to prevent lymphocele. It is better to remove the drain early than keeping it for long to avoid nosocomial infections.

Preoperative antibiotherapy is enough to prevent the infection.

Mission: To advocate and advance new treatments for curing lymphedema and making these therapies available to patients in need.
Read more ...

Dr. Becker has offices in Paris and Italy.
(Click on the addresses below to open a map)